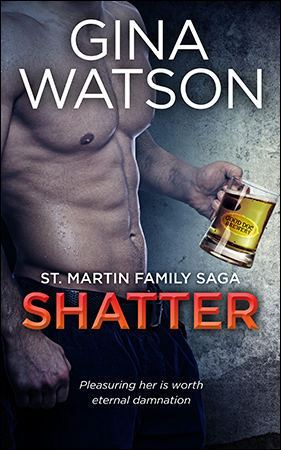 Logan St. Martin has secrets. For instance, why does he operate a brewery instead of putting his medical license to use?  Why is he so unlike the rest of the St. Martin family? Mysteries aside, he is smart and successful in all that he endeavors and he has set his sights on Miss Jessica Hunter, a flame haired goddess who owns the Italian restaurant in town. A business merger is the next item on his agenda.

Jessica Hunter is on a mission. Her child needs a father, a responsible and disciplined man that will make a good role model for her son. Certainly not some irresponsible brute with shaggy hair and facial stubble whose wardrobe consists of flip-flops, cargo shorts, and screen-print T-shirts. However, while her son has need of a father, her body has needs that have gone unfulfilled for over five years and it seems a shame to waste the steamy bronzed hunk of man that is Logan St. Martin.

When their first encounter leads to an unexpected but explosive bout of steamy sex, Logan tells Jessie there’s absolutely nothing that can keep him from making her his, including the pits of hell. Too bad Jessie has no intention of following him on his way to eternal damnation.

Logan pulled into the gravel lot of La Bella Luna and jumped out of his truck. It was between lunch and dinner, so not much was shaking inside the restaurant. He walked toward the bar, where a young woman, her back to him, was filling salt and pepper shakers.

“You’re late,” the woman responded with a terse voice.

Logan leaned in closer. “How’s that?”

She had spunk. Or maybe she was majorly crabby. He hoped it was spunk. He didn’t want to partner with some bitchy woman. Whistling and studying the near empty restaurant, he said, “Shall I come back at a less busy time?”

He saw her neck tighten. Or maybe it was her back straightening into a board as she forced herself to curb her response. Whatever it was, he noticed the movement. And he noticed because he was focusing on the rust-colored hair that was tied into a thick knot at the nape of her neck. Pretty hair. Too pretty to be knotted tight—

She turned, and his breathing hitched. She was incredible. Truly breathtaking. And he immediately knew he was in trouble. Logan was a sucker for redheads, and with her milky skin and sizzling blue eyes melting into him, his heart started racing. Her lips were parted. Her top teeth peeked out and landed on her thick bottom lip as she began to nervously chew at it.

His mouth instantly wanted to do the same, to nibble and taste and explore her lips and the heat of her mouth.

She took him in with equal curiosity, scanning him from head to toe as her long dark lashes created shadows across her pink cheeks. He wanted to run his fingers through the lustrous hair piled atop her head. There was an abundance of it, and he thought he caught a scent of apple cinnamon. She was wearing black shorts and a white T-shirt with a nametag that read Jessie. She untied the black apron from her waist and motioned for him to follow her. He had no problem following those twitching hips.

Her office was full of file cabinets and everything needed to run her business. In the corner were stacks of T-shirts, shorts, and aprons. Logan assumed it was the standard uniform. A box of invoices and a ten-key adding machine sat on her desk next to an accounting log. The space was considerably messy, given how clean and organized the restaurant was. He took the chair next to her desk while she let out a grunt and dropped into her desk chair. A bare light bulb screwed into the ceiling was the only light in the office.

Jessie cleared her throat. “Under the circumstances, I don’t think this partnership is a good idea after all.”

Logan leaned back into his chair and crossed his arms over his chest. “Is that so?”

She raised a dark copper brow. “Yes, I do believe it is.”

She was certainly cute the way she asserted herself, restrained and calm. He wondered if she held herself back like that in the sack. He smirked and allowed a laugh to break free.

Jessica thought Logan St. Martin couldn’t possibly think she would enter into a business partnership with him. The man looked like a bum. A cute bum, but a bum nonetheless.

He wore cargo shorts and a green T-shirt bearing an image of a frothy mug of beer. The T-shirt’s caption read The Drinking Games, only one will be left standing. His leather sandals had flopped—no flipping, just flop, flop, flop—all the way down the hallway to her office. To top it off, he was late and sarcastic. She knew his type. Nothing was as important to him as his fun and games. He’d be out of business within the year.
Well, he could forget joining up with her—there was no way she’d have him add dead weight to her existing financial problems. She worked her ass off to make this place work and still her efforts might not be enough.

Women probably threw themselves at him because of his long sandy blond hair worn in fashionable disarray and his immense green eyes. He was tall and slim, with all-over facial hair clipped close to his square face. Damn, why’d he have to look the way he looked? Whiskers were Jessie’s weakness.

So yeah, damn him and his sexy smirk.

“This may be a joke to you, Mr. St. Martin, but this is my life. I won’t have you traipsing in here whenever the spirit moves you. If I can’t rely on you to be on time or to at least give me a courtesy call, then I won’t be able to trust you in a partnership.”

She stood to leave, but he caught her by the wrist.

“Sit down.” His voice was authoritative, and his smirk had been replaced with a piercing stare.

“I know you need this opportunity to make your business thrive. You won’t find another distributor willing to provide the product up front for no cost until you deliver the goods. I understand sweat equity, but I assume you’re out on the floor filling salt and pepper shakers and napkin dispensers because money is tight. I take it you wait tables all night as well, that’s why you’re behind on paperwork in here. Look, I know business. It’s only my first year, but I’m operating considerably in the black. You need my help. And call me Logan. I’ll be calling you Jessie.”

Hoping to score some snacks with this look. #grizz

#grizzlybearwatson enjoying the recliner and cozy

This is a cake that always turns out. #kahlua #cak