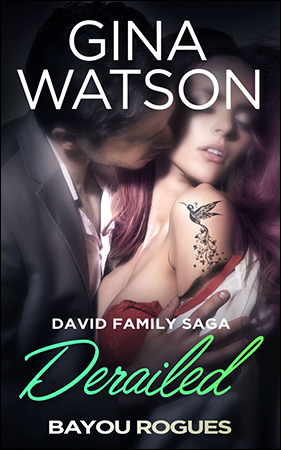 One shared night of bliss lingered on their skin.

They both wanted more, but were living worlds apart.

Fiona has secrets—secrets that keep her from pursuing a relationship with Everett David. After the night they shared in New York, her mind says no, but her body says yes.

Everett has thought of nothing but Fiona since the night she shared his bed, but he senses she’s keeping something from him. He longs to close the gap between their distance, both internal and external, but first he’ll have to convince Fiona that their connection is worth pursuing.

Everett reclined in the pool, the heavy tropical Louisiana air making him lazy. He didn’t have too much work to consider these days. It was the southern way—he who is laziest wins the game. Once he’d made partner at the Boston firm his workload had diminished by more than half.

Courtney walked out onto the back porch of their childhood home. Only Courtney wasn’t a child. Neither was Parker or Julian. It baffled Everett that they still lived at home. Unlike him, they had no ambition. He smiled, satisfied with himself and his accomplishments. He would have done anything that would have led him far away from Louisiana.

Courtney dove into the pool, splashing water onto his prized pre-season release Dolce & Gabbana sunglasses. “Dammit Courtney, you splashed water on my glasses.”

“Have you become that much of a pussy, Everett? Boston’s made you soft.”

“I just didn’t realize you were so rude and uncultured.”

“Why are you still here anyway? Aren’t you afraid the southern Louisiana stink is going to get into your perfectly cleaned pores?”

Yes, Everett was in fact leery of certain aspects of the South—the gun-slinging backwoods conservative zealots for one. “If you must know I’m here to support Parker and Julian.”

“They seem to be doing just fine without your support.” Courtney laughed deeply, and then pushed a wall of water at Everett.

“You’re going to pay for that, kiddo!” Everett pounced on Courtney and pushed her until they were both underwater and in need of oxygen. They made it to the surface and gasped for breath.

“You splashed me,” Everett said around a cough. “And don’t ever call me that.”

“I’ll tell Marcus Peterson that you want to have his babies.”

“Eww.” Courtney’s nose scrunched. “You’ve just got your panties in a twist because you can’t get Maura’s friend to go out with you. I believe they call that a shutout.”

Everett balanced precariously on a pool lounger. He’d made some gains with Fiona. They’d had a blast together in New York. He’d taken her to a bar after Phantom of the Opera. They’d both had a little too much to drink and the rest was history, as they say. But he wasn’t going to tell his little sister that.

“I’m going to have more time to work on her.”

“How so?” Courtney sat on a pool step and applied sunscreen to her arms.

“I’m working on a gig at the Baton Rouge office.”

“You accepted a Louisiana gig?”

“He’s not that much older than we are.”

Courtney frowned, “No but he’s totally screwed in the head.”

“At least I can function in modern society. When’s the last time he even set foot outside of that dilapidated plantation?”

“Dad says he doesn’t ever leave.”

“I guess he doesn’t have any reason to leave. However, his snubbing of Mom’s holiday invitation every year is starting to piss me off. We share a property line with the guy—besides, he’s our cousin.”

Everett looked across the property in the general direction of Ashton David’s plantation. “It must be hell on him to be so tormented at so young an age.”

“It must.” Courtney followed Everett’s gaze, and then they shared a knowing moment of silence for their estranged cousin who in his mid-thirties had been through as much suffering as Dante Alighieri when he descended into the ninth circle of hell.

“Still, I’m going over later today to get his estate in order. He’s got some oil leases he wants me to look over. Do you want to go with me?”

“Why are we taking the long way around?”

Everett looked upon his sister with measured disdain. “I’m not driving the BMW across a field.”

“Fine. We could have taken the mule, you know.”

“I climbed into Dad’s old Ford, but the battery was dead.”

“It’s what happens when vehicles sit up.” Everett shrugged.

“So you’re back indefinitely?”

“You could come visit me more than you do. Of course that would require you to leave your beloved Baton Rouge.”

“Plane goes both ways, you know. Plus I have my job. It’s hard to get away.”

“It’s picked up. Parker and Bailey finally moved into their new home. It’s nice. Whenever you’re ready to settle down with Fiona, give me a holler.”

“A girl can dream.” She sighed.

“Shit, I passed the entrance.”

“I didn’t see one.” Courtney turned back to glance over her shoulder.

“It’s overgrown.” Everett U-turned and doubled back to the barely visible gravel lane. As soon as he made the turn onto number two David Way, long gangly fingers made of oak scraped against the fancy car creating a sickening squeak. “Shit.”

“So much for not scratching your Beemer. Why does he not keep up with the yard?”

Alley after alley of oaks lined the gravel road that snaked up to the home. Each three-hundred-year-old tree reminded Everett of Medusa, with its many long and twisted limbs that almost seemed to reach out and grab him. The canopy beneath the trees was so thick it had triggered the automatic headlights to engage.

“Tell me about it.” The winding gravel lane seemed to have no end. “Where’s the house?”

Ahead, Everett saw the house slowly come into view. It was a double balconied monstrosity. “I think it used to be white.”

“It’s ghastly.” Courtney added a dramatic gasp to round out her summation. “Does he have anyone to help him care for the place?”

Everett scoffed. “This clan has more money than we do.”

Courtney shrugged. “I just don’t get it.”

“Do me a favor, don’t say things like that when we get in there. Dad said this is the first time Ashton has reached out to anyone since the incident.”

“Hold on,” Courtney mimed putting on a halo. Everett rolled his eyes at her, and then in true southern country fashion, put the car in park in the middle of the massive lawn.

Walking up to the front of the towering structure Courtney leaned into Everett, “You couldn’t pay me to live in this place.”

Large blue eyes blinked back at him. “That’s my last thing. I promise.”

“Good, because we’re here.” They climbed out of the car and waded through knee-high grass and weeds to the rotting wooden steps leading to the porch. Maneuvering the steps required a fair amount of skill to avoid falling through. As they reached the door Everett pressed the illuminated doorbell button.

“Well you wouldn’t hear it out here.”

“I think you can hear our bell from the porch,” she haughtily countered.

“Our bell is ridiculous. It plays Rodeo Hoedown.”

“You would.” Everett rang the bell again.

“What’s that supposed to mean?” She poked a sculpted nail into his neck.

“Oh, please! If that isn’t the pot calling the kettle black!”

Everett engaged the ornate lion’s head that was the doorknocker. “Weird.”

Uncomfortable, they both turned and looked back across the lawn at the BMW. A loud crack of wood reclaimed their attention as they turned to see the door opening, sticking after years of weathering.

A little intake of breath could be heard emitting from Courtney. It was small, but Ashton’s narrowing eyes ensured he’d heard it. She was so not being cool.

Ashton lunged at Courtney, his hand cupping her collarbone. Her eyes wide she searched for Everett. Stepping forward he prepared for an altercation, but before he could throw a punch Ashton pulled his hand away, enclosing his fingers around his palm. He bent before them and lifted his dirty work boot, smashing whatever he held in his hand. When he moved Everett saw a horsefly the size of a dollar coin.

“Horsefly’s are as big as buzzards around here. Suck the life right out of you.”

“Ashton, it’s been a long time. Much obliged. Love what you’ve done with the place.” Courtney laughed and just like that she had proceeded across the threshold leaving Ashton and Everett staring at one another.

@libbeysmeats Steak on the grill. 🥩 🔥 #grill