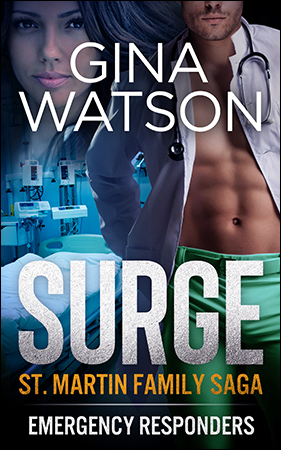 He was twenty-eight, she was eighteen.

Everyone around them opposed their love.

But their love was much greater than the sum of their ages.

Clara’s family took Jackson in when, at the age of seventeen, he’d lost his parents. The St. Martins were the only family he had. When his connection with Clara developed into something stronger, he couldn’t feel remorseful. What he did feel was warmth, hope, and love. Ten years later it was time to tell the family—he wouldn’t let their love be a lie any longer.

When he came to live with them, Clara knew one day she’d marry him. She just didn’t know her family wouldn’t be on board with the plans. Sure, Jackson was much older than her and yeah, they’d jumped the gun on intimacy, but she’d needed Jackson’s touch that day and he’d needed hers. They planned to marry once he finished medical school, but when Clara’s brother found out about their two-year relationship he beat the good doctor’s face until he was unrecognizable.

Jackson couldn’t see a way  they could be together and she wouldn’t have to make a choice between him and her family. He knew what it was to go through life without the support of family and he wouldn’t let her choose him over the St. Martins.

Will Clara and Jackson be able to have a future together, or will her family tear them apart?

As Clara read the text she thought about how extremely testy her man had been lately. She knew completing his hospital residency, along with his fulltime job as a paramedic, took its toll on Jackson, but she couldn’t convince him to slow down. She’d have to see what she could do to soothe him. It was Saturday and he had a rare day off. Today was a big day, Clay was marrying Eve—Augie was marrying Mia, again.

She typed a reply text using just her thumbs.

Be there in a bit. Had to get brides b-fast trays.

She’d told him to sleep in. Figured she’d be busy as wedding coordinator extraordinaire—she added the flair to her title.

Hurry, I need you.

She whispered, “Oh Cracker Jack, I need you more.” She smiled at the use of his nickname. He gorged on bags of the stuff while he completed endless mountains of paperwork and reports for med school.

She’d known he wouldn’t stay in bed without her, but he had been behind on sleep and so she’d hoped. She grabbed two mimosas from the kitchen and made her way out to the pool house where the men were staying. She’d done her hair and makeup, but hadn’t put on her bridesmaid dress yet. So that she could move about freely she wore khaki shorts and a white tank top. Surely there’d be a decoration to tape up or some toile to adjust and she wanted the freedom shorts could afford.

She opened the door to the pool house and found him slouched on the couch, a frown on his face.

“Hey.” She smiled, walked over to him, and straddled him on the couch. “I brought mimosas.” She teased him with the orange drink holding the glasses up, but just out of reach. She kissed his lips and his pout started to turn. “But you can only have it if you promise not to be such an Oscar the Grouch.” She offered an exaggerated pout of her own.

His frown was back. “Come on Cracker Jack, it’s a most glorious day.”

“I’m on call. I can’t have it.” Big bottom lip protruding pout.

“I told you to sleep in. You look tired.”

He traced a hair back behind her ear. “I missed my Bug.”

She giggled. “I think we were apart for about an hour.”

“I don’t care. I don’t like waking without you.” His eyes tightened. “And I’m not happy about today either. It’s been two years, we should be the ones getting married.”

She took a large sip of the champagne and orange juice before setting the glasses on the couch-side table. She kissed him and smiled against his lips. “We will be baby. Soon. But we can’t move forward until we tell my brother and we can’t do that until you finish your residency.”

“Because that’s what we decided.”

“I want to revise the decision. Anyway, I’m almost done.”

“How about I kiss you here,” she nipped at his lips, “and when we’re done with that I’ll kiss you down here.” She fisted between his legs. “See if we can’t turn that frown upside down.”

Slowly and passionately he kissed her and a moan from deep in his throat vibrated his tongue and hers. One of his hands slid up the back of her neck to grip her hair while the other cupped her jaw. His kiss was demanding and needy. He explored her deeply and alternated rough and soft strokes. She loved his kiss, his touch, his everything—even his brooding.

He was ten years her senior, but that didn’t matter so much because she’d loved him since she was seven years old.

Her Jackson. As the seasons changed and the years passed their connection grew into friendship and then into something more. They’d started getting intimate when she was sixteen and he was twenty-six. It was part of the reason they hadn’t told her family.

Her hand fiddled with the hardware on his jeans as she made a production of slowly undoing each button. She knew how it sounded—their admission wouldn’t paint a nice likeness of Jackson. She knew Clay had suspicions and had even alluded to their relationship, but they’d thrown him off the hunt numerous times. Luckily, Eve had kept him exceedingly distracted.

She pulled his cock free and gasped at the readiness of it. He chuckled. His deep blue eyes shimmered like sunlight on the sea. She shimmied down his legs to kneel on the floor. He grabbed a pillow, “Here bug don’t kneel on the hard floor.” She rose up and he slid the cushion under her knees.

Grasping his weight in her hands she licked the head and then took him between her lips. She pumped the root while applying light pressure with the suction of her mouth. He palmed her head and aided her efforts. “God, Bug, I love being in your mouth.” She loved it too. Their connection had always been powerful. Their energy had been too potent to ignore. That’s what had happened when she was sixteen. And once they’d connected on a physical level they couldn’t stop. It was as if one could not exist without the other. She took him deep, loving the feel of him and the groans he made for her.

“Christ. Your brother’s coming.” Her mind was disoriented, but Jackson pulled her from the floor, the momentum throwing her forward and onto him. His hands at her waist moved her onto the couch. While he fastened his jeans she lifted the pillow from the floor. He’d barely finished containing himself when they heard the snick of the door opening Clay’s wide ice blue eyes met her own before they narrowed to slits. His gaze migrated to Jackson and back to her.

“Clara.” He frowned. “Just what are you doing out here?” His deep baritone reverberated around the room.

“I was looking for you.” Jackson’s hand started to rub against his denim-clad thigh. She knew he hated the lies they sometimes had to tell to hide their relationship.

“I saw you walking out here fifteen minutes ago. What have you been doing?” His eyes darted between her and Jackson.

“Been talking with Jackson.” His hand rubbed faster against his thigh. “I brought mimosas, but he told me about being on call at the hospital.” She jumped up and skipped to Clay throwing her arms around his neck and kissing him square on the lips. “Such a wonderful day. I love you. I’m so happy my big brother is getting married to his one and only love.”

He squeezed her tight. “Love you too baby girl.”

“Are you being a good boy?” She smiled up at his six-foot-five frame.

“Augie’s the one you should be worried about. He’s in Mia’s room.”

“Are you serious? That’s not allowed.”

She gasped. “Why was she crying?”

Clay shrugged. “Augie made her cry.”

“Bug—err—Clara, you better go check on her.” She turned to Jackson on the couch and couldn’t help the slight smile that was forming at the corner of her mouth.

She kissed Clay’s cheek. “Text me if you need anything.”

She looked back at Jackson. He was always so serious. She’d seen him laugh just a few times and it was usually at something she’d done or said. She wished she could think of something now that would bring him relief. His downturned eyes and stiff body held so much pain it made her stomach ache. Clay’s head was turned away from her so she held up the universal hand sign for I love you and then she blew him a kiss. The right side of his mouth lifted ever so slightly.

Chicken taquito night. Taquitos get no love but if