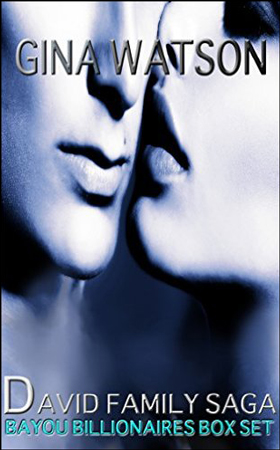 The set begins with the story of Ashton who lives a tormented life in the Louisiana plantation home that once belonged to his father. It’s drafty, tattered, torn, and haunted. When his high school girlfriend comes back to town, she refuses to let Ashton continue to waste away and be tormented by the ghost of his father. Only problem is…Ashton doesn’t want to be saved.

In the second book we meet Cameron, a crooner of dark, evocative ballads that have the capability of melting more than just hearts. Cameron is a drifter, and despite not wanting to be tied down himself, wants to do just that to his long-time girlfriend. But Meg is not so easily influenced by his dark mystery and refuses to let herself be compromised by his lifestyle.

And now that brings us to Max—pompous, high-handed and tenured professor of English at LSU who thinks women are to be seen and not heard. That is until his office assistant of six years finally gives him a glimpse of just how dark and depleted his life is.

Gabriel, the artist, is dealing with his own demons from the past that he hasn’t been able to shake. When he meets an exotic dancer, the one thing he’s been searching for over the past ten years is found. The only problem is, Mirabelle has needs of her own.

In the fifth and final book we meet Zach. His production company is a magnet for trouble and when his cleaning woman shows up with much more than a mop and bucket, he’s instantly attracted to her mystery. As the days fall away, trouble heightens and Max is forced to make a life-altering decision.

Why spend the evening alone when you could spend it with five brothers who are successful, sexy as hell, and in need of more?

@libbeysmeats Steak on the grill. 🥩 🔥 #grill